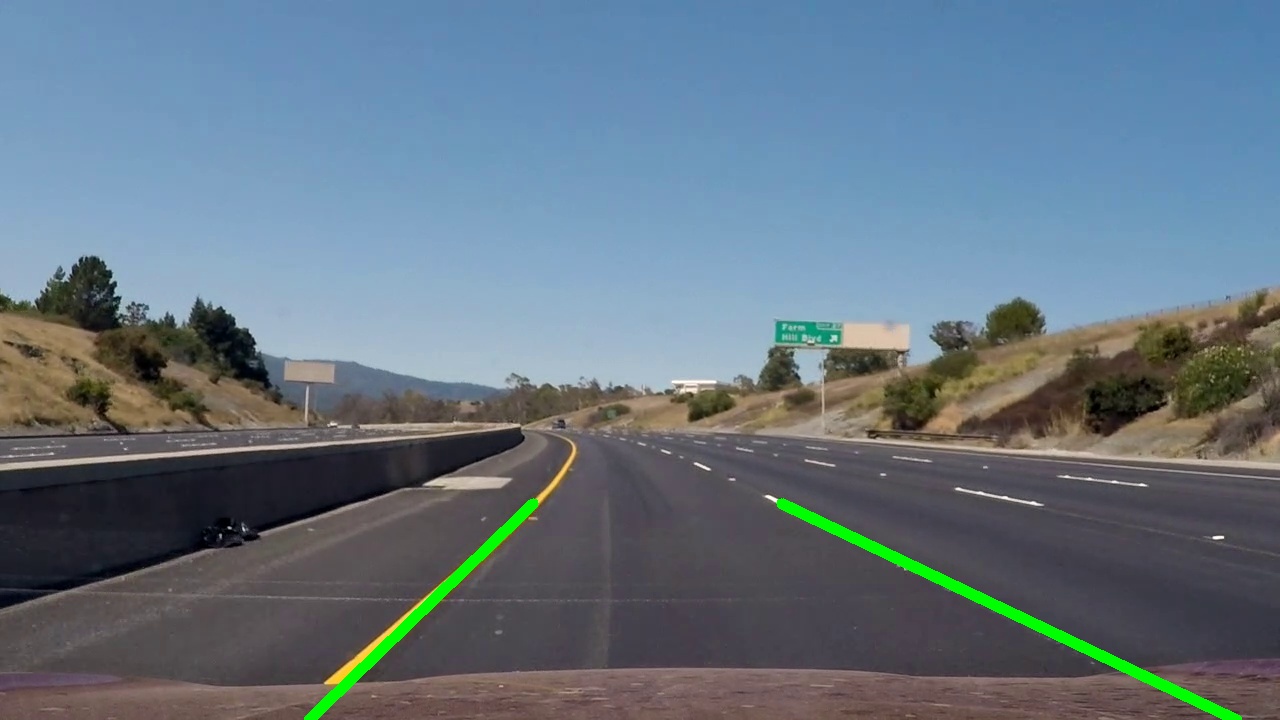 This project was a part of different projects in the course ENPM673: Perception for Autonomous Robots at the University of Maryland. The code for this project is written in python using OpenCV and can be found at my Github repo here

The project aims to detect lanes using simple (and complex) computer vision algorithms. Though you might be excited to see machine learning here, but to be honest we don’t need a machine-learning algorithm to solve this problem. You will see that how using simple algorithms would help us to detect lanes in an image. This image processing pipeline can be scalable to support live video feed.

Let’s take an image just as below which has a clear view of lanes. 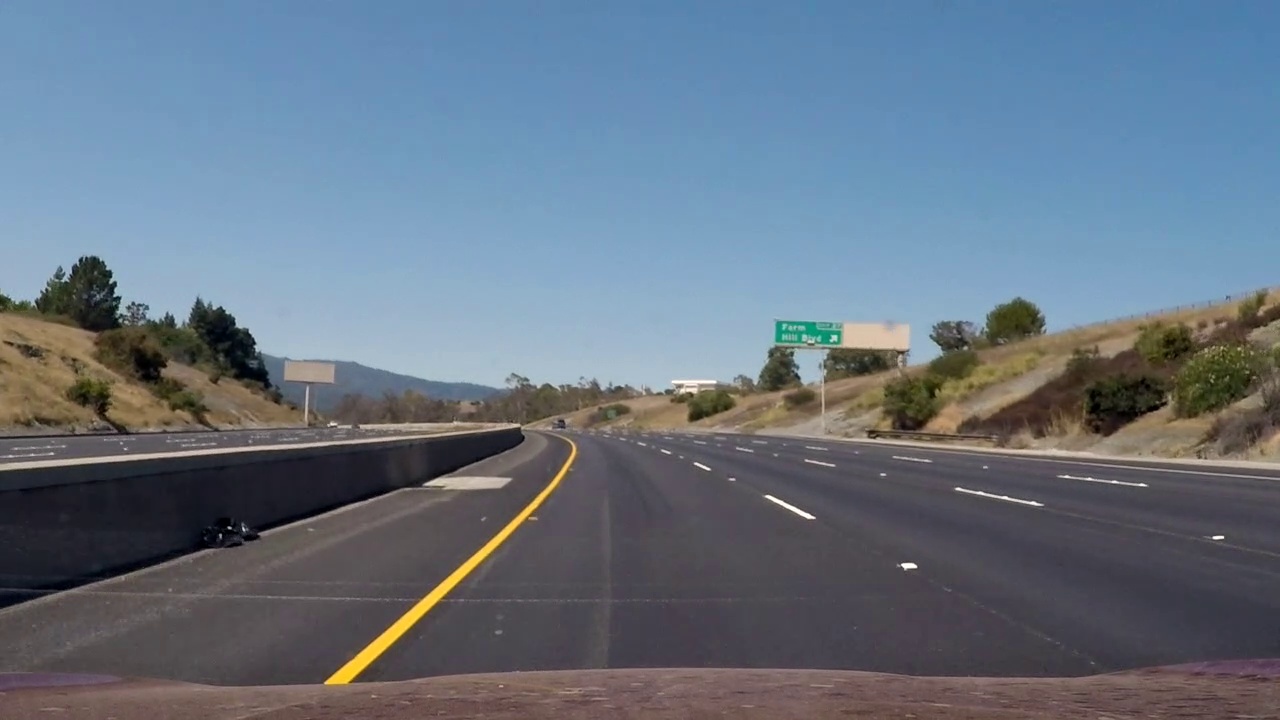 We convert the color image to greyscale image because color information is irrelevant to us and after that, we would apply Gaussian smoothing or filtering this would help reduce the noise in our image. Below code, snippet demonstrates this operation in python.

Now the preprocessed image would look something like this 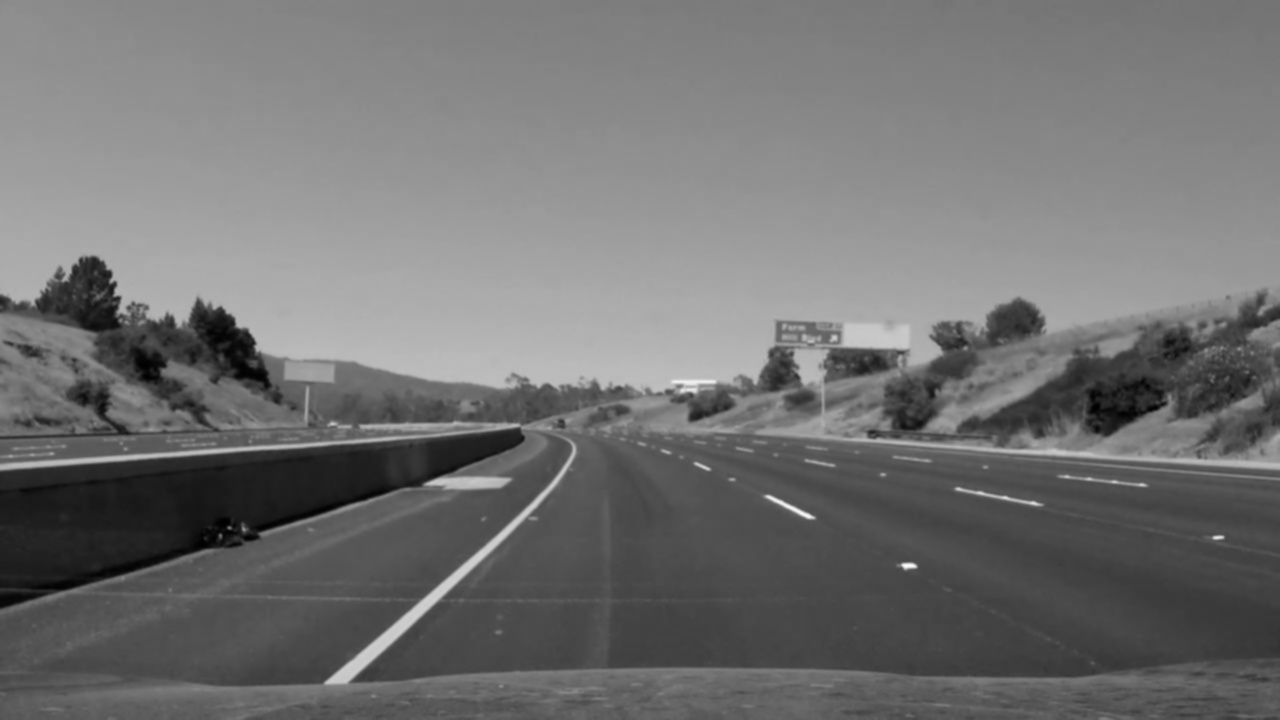 Now we have a perfect denoised image and for the next step, we would be detecting edges. The popular algorithm for edge detections is Canny Edge detection and Sobel Operator. We would be using a canny edge detector as it works accurately in lane detection. But please feel free to experiment by yourself.

One question that you might have is why? Why do we want to extract a region of interest? The reason is simple - to focus on what’s important. For this objective (lane detection), which data would be important? Most important data or information is the lane itself.

Extracting ROI, which is the lane, would help us to further reduce noise in our image. TO extract the region, first we need the points from the image from which we can construct a polygon. After constructing polygon, we use masking to mask the region which is not our ROI. This way we can extract ROI using OpenCV. 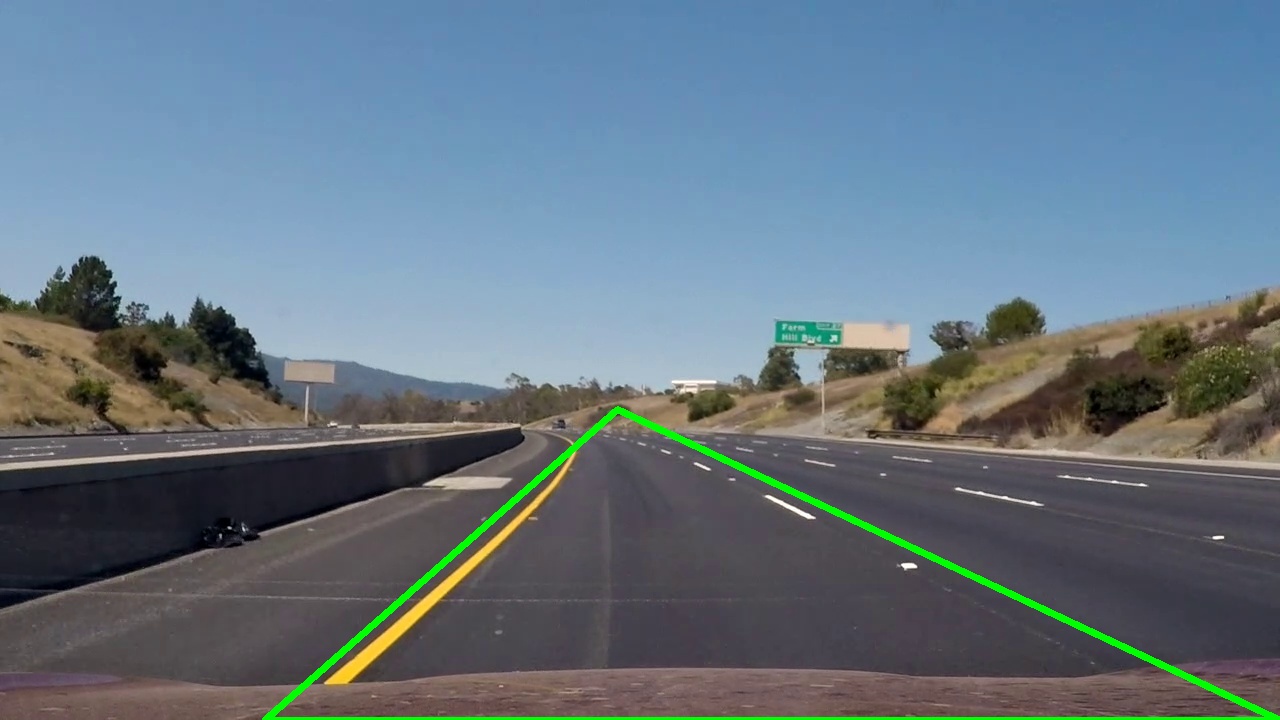 You can also choose an ROI with four sides or five sides as long as it serves your purpose.

Below code, snippet contains a function which extracts this ROI

Now that we have an ROI image only thing left to do is drawing a line. For that, we first need to detect if there is a line in our image. To do that we would use the hough transform.

Hough transform can detect any shape (not joking) but only if one can mathematically represent it. We will be using this technique to detect line as we can definitely it mathematically (y = mx + c or p = x cos \theta + y sin \theta).

OpenCV uses the latter representation of line and if you are curious then you can find more information on hough lines here. 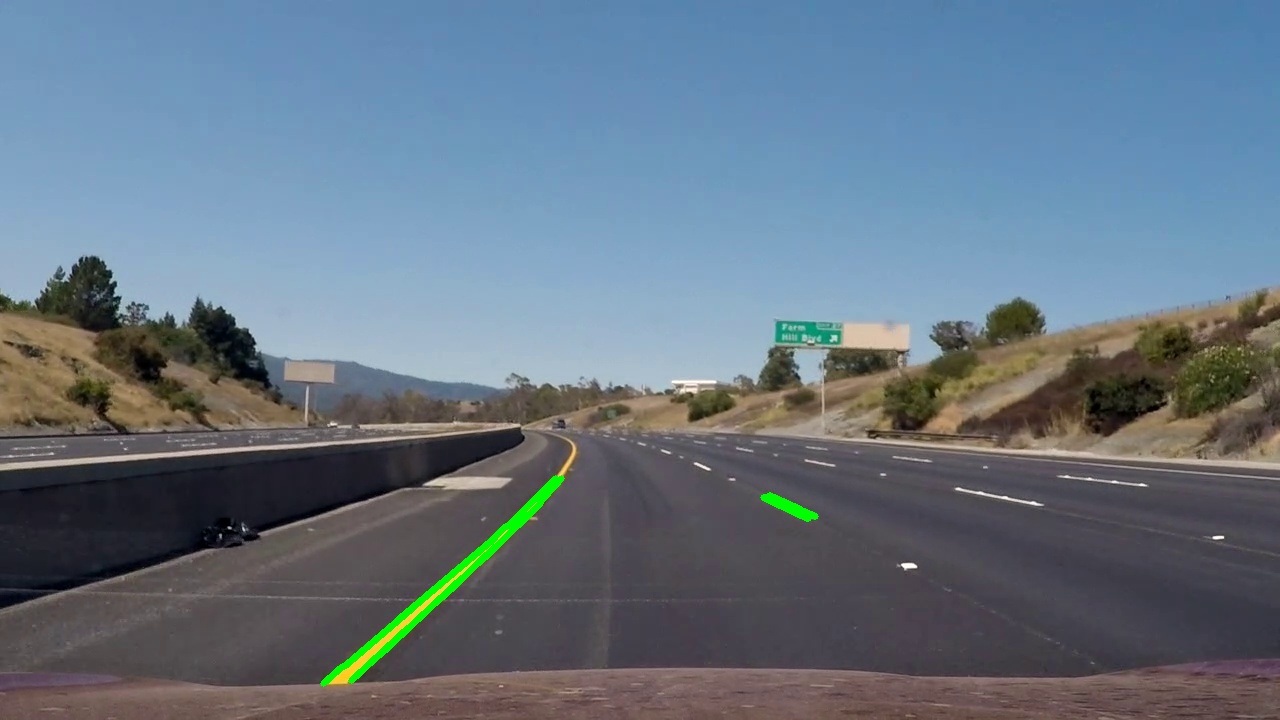 cv2.HoughLinesP provided four lines but only on the left seems consistent compared to the right. To get a consistent line on both sides we need to extract their slops and find the average. The average slope will give us one line from which we can draw a line of any length.

Now with the average slope, we can construct a line of any length as from slopes and y coordinates we can examine what would be x coordinates.

And that’s it, we successfully detected lanes. Single lane lines would look something like this

We successfully detected lane using OpenCV and python. You can use below image as reference for the pipeline that we discussed in this article. 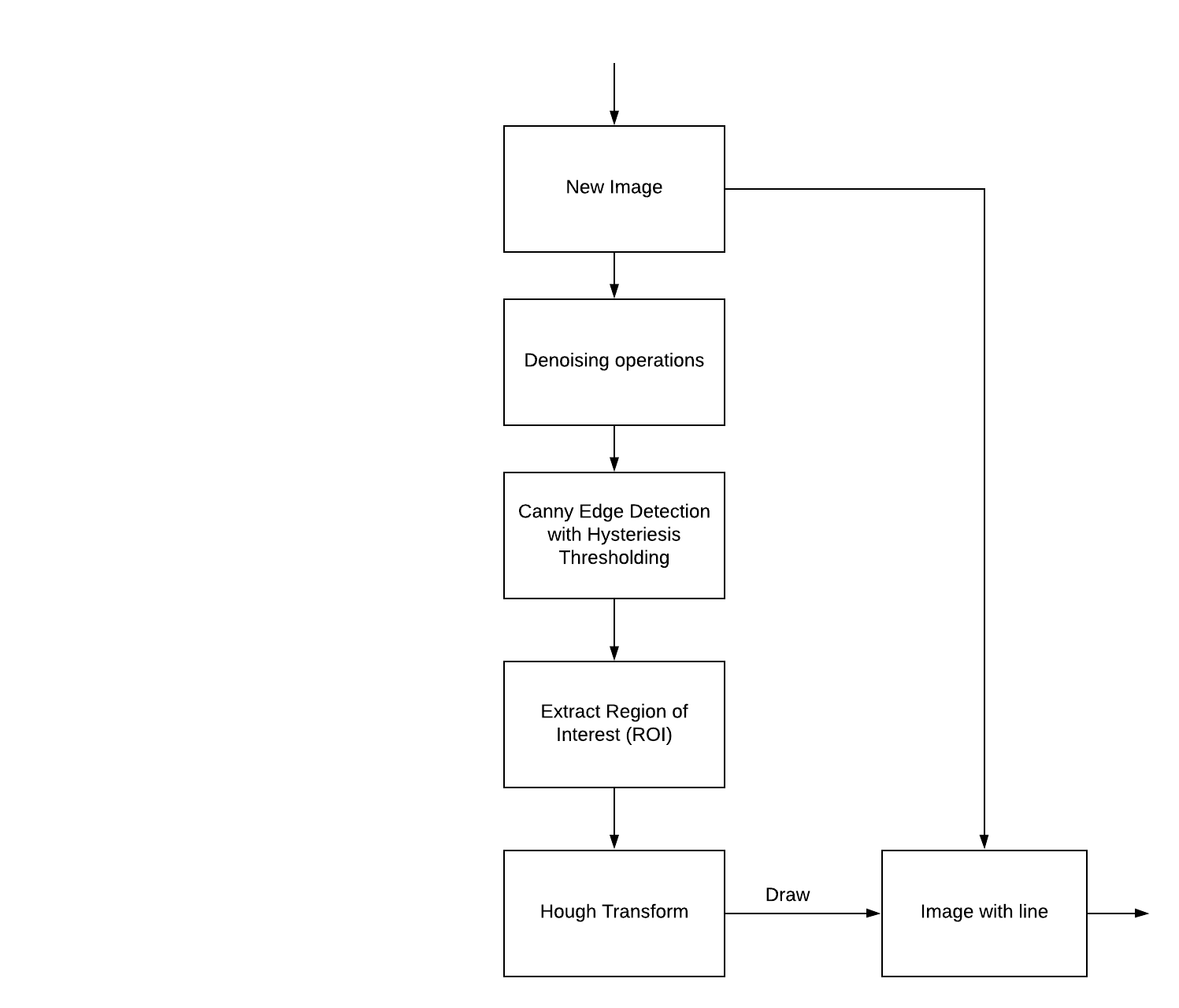 Well, this is not the only method (or pipeline) for lane detection. You can use the color masking method which masks colors in the plane of HSV. You will need two masks one for the yellow lane and another for the white lane. Then you process the image similarly shown here. This approach would only work if there is a yellow lane on your left. But if you consider robustness, I think this pipeline would seem fit.